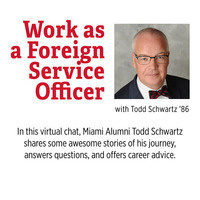 Work as a Foreign Service Officer With Todd Schwartz '86

There isn't much that Todd Schwartz, '86 Miami alum, hasn't seen or done in his 28 years as a Foreign Service Officer. The work requires a lot of different skills and crosses all Career Clusters. In this virtual chat, Todd will share some awesome stories, answer any questions, and give advice.

Read in Todd's own words how his experiences connect across all career clusters.
http://drive.google.com/file/d/1BdpmxXr38d9djofLXFhPDprWcXX6h-Sq/view?usp=sharing

To request accommodations (i.e., sign language interpreters, captioning, materials in an alternative format, etc.), please contact the Miller Center for Student Disability Services at (513) 529-1541, 7-1-1 (TTY-TDD), at least 2 business days prior to the event to ensure the smooth delivery of services.