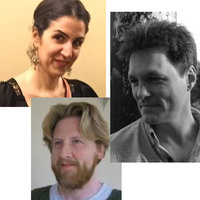 Translators and creative writers Poupeh Missaghi, Roy Kesey, and Martin Corless-Smith will read from their own work Monday, September 16 at 7:30 at the Brick and Ivy Campus Store.

Poupeh Missaghi is a writer, a translator both into and out of Persian, Asymptote’s Iran editor-at-large, and an educator. She holds a Ph.D. in English—creative writing from the University of Denver, an M.A. in creative writing from Johns Hopkins University, and an M.A. in translation studies. Her nonfiction, fiction, and translations have appeared in numerous journals, and she has several books of translation published in Iran. Her first novel, trans(re)lating house one, will be published by Coffeehouse Press this spring. She is currently a visiting assistant professor at the Department of Writing at the Pratt Institute, Brooklyn.

Roy Kesey has won an NEA grant for fiction and a PEN/Heim grant for translation. His translation of Pola Oloixarac’s debut novel Savage Theories (Entropía/Soho Press) was shortlisted for 2018 BTB award (University of Rochester/Three Percent) and the 2018 Tournament of Books (The Morning News). His translation of her novel Dark Constellations (Literatura Random House/Soho Press) is forthcoming in April 2019.

Martin Corless-Smith was born and raised in Worcestershire, England. He is a poet, painter and essayist. His books of poetry include Of Piscator, Complete Travels (West House Books, 2000), Nota (Fence Books, 2003), Swallows (Fence Books, 2006), English Fragments: A Brief History of the Soul (Fence Books, 2010), Bitter Green (Fence Books, 2015), andThe Fool and the Bee (Shearsman Books, 2019). His first book of fiction, This Fatal Looking Glass, was published by SplitLevel Texts in April, 2015. He is Professor of Creative Writing at Boise State University. His latest book is Odious Horizons: Some Versions of Horace (Miami University Press, 2019).