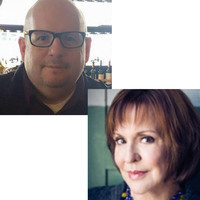 Keith Banner is the co-founder of Visionaries + Voices and Thunder-Sky, Inc., two non-profit arts organizations in Cincinnati. He is a social worker for people with developmental disabilities full-time, and taught creative writing part-time at Miami University (Oxford, Ohio) for over 20 years. He has published three works of fiction, The Life I Lead, a novel (Knopf, 1999), The Smallest People Alive (Carnegie Mellon Press, 2004), a book of short stories, and Next to Nothing (Lethe Press, 2014), his second collection of stories. A third collection of stories, This Is True Love, is forthcoming. He has published numerous short stories and essays in magazines and journals, including American Folk Art Messenger, Other Voices, Washington Square, Kenyon Review, and Third Coast.

Jacquelyn Mitchard has written twelve novels for adults, including several New York Times bestsellers. She has also written seven novels for young adults, five children’s books, a memoir, Mother Less Child, and a collection of essays, The Rest of Us: Dispatches from the Mother Ship. Mitchard’s work in Shadow Show, the anthology of short stories honoring her mentor, Ray Bradbury, won the Bram Stoker Award and Shirley Jackson Award, and was short-listed for the Audie Award. She served on the Fiction jury for the 2003 National Book Awards, and her first novel, The Deep End of the Ocean, was the inaugural selection of the Oprah Winfrey Book Club and later adapted for a feature film starring and produced by Michelle Pfeiffer.