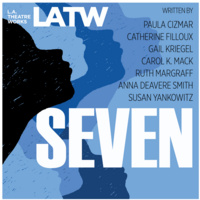 Even in the darkest times, one person, one voice, and a single act of courage, can change the lives of thousands.
Programmed in celebration of the 100th Anniversary of women’s right to vote, this riveting documentary-play was conceived and written by seven female writers about seven remarkable women who faced life-threatening obstacles before bringing heroic changes to their home countries of Pakistan, Nigeria, Ireland, Afghanistan, Guatemala, Russia and Cambodia.

The extraordinary cast includes Maritxell Carrero whose TV credits include Dame Chocolate and Bajo Las Riendas del Amor and Lovlee Carroll who has been seen in Grey’s Anatomy, How to Get Away with Murder, and Scorpion; as well as stage and television actresses Tess Lina, Laila Ayad, Sarah Hollis, Ellis Greer with screen credits such as ER and Seinfeld and LA Theatre Works regular Shannon Holt.