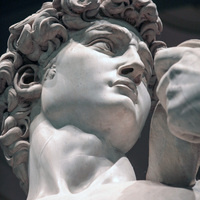 MUOpera: The Light in the Piazza

The Light in the Piazza takes place in Italy in the summer of 1953. Margaret Johnson, the wife of a wealthy American businessman, is touring Florence with her daughter, Clara. While sightseeing, Clara, loses her hat in a sudden gust. As if guided by Cupid, the hat lands at the feet of Fabrizio Naccarelli, a handsome young Florentine, sparking an immediate and intense romance. Margaret tries to keep her daughter from Fabrizio as she is guarding a secret which may destroy Clara’s only chance to know true love. As the relationship grows, we learn that Clara’s radiant innocence is the result of brain damage from a childhood incident. Margaret is forced to reconsider not only Clara’s future, but her own as well.

The Light in the Piazza occupies the rare air between musical and opera, with a sweeping operatic score paired with a more theatrical mode of story telling. The musical, which garnered six Tony Awards, debuted on Broadway in 2005. Guettel’s ambitious score is demanding both musically and emotionally. The production will feature a grand set designed by Nicholas Muni with stage direction by Benjamin Smolder. We are excited to welcome you back to live theater with a production that the New York Times called “the most romantic score since West Side Story.”

Book by Craig Lucas
Music and Lyrics by Adam Guettel
Produced by arrangement with Turner Entertainment Co.
Owner of the original motion picture "Light In The Piazza"
Based on the Novel by Elizabeth Spencer