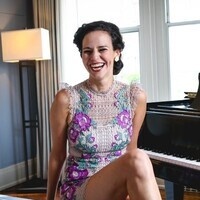 Mandy Gonzalez, now starring in the Tony Award-winning hit musical Hamilton as Angelica Schuyler, brings her acclaimed show and talent to Miami for one night only. Star of Broadway, television, and film, now she adds chanteuse to her resume. In her new show, Mandy raises the roof with her powerhouse vocals in an evening of classic Broadway, pop, and standards. Broadway.com called her performance “one of the best shows we've seen yet.” We predict you will, too.