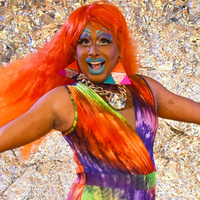 Lessons in Drag: An Evening with Lawhore Vagistan

Kareem Khubchandani is the Mellon Bridge Assistant Professor in the Dept. of Drama & Dance and the Program in Women's, Gender, and Sexuality Studies at Tufts University teaching at the intersection of performance studies and queer studies. He holds a Ph.D. in Performance Studies from Northwestern University, and previously served as the inaugural Embrey Foundation Postdoctoral Fellow at the Center for Women's and Gender Studies at the University of Texas at Austin.

This lecture and show was not only entertaining and timely, but created a beautiful environment of safety, learning, and community. I would reccommend this show to anyone, and I am grateful I got to see it too.