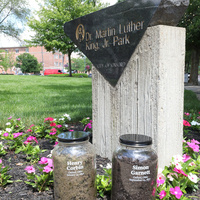 A narrative historic marker is now a permanent fixture in Oxford.

An unveiling ceremony will be held at 9 a.m. Monday, June 21, in the Dr. Martin Luther King, Jr. Park.

The event is free and open to the public. Follow COVID guidelines from the Centers for Disease Control and the City of Oxford.

Culminating several years of work led by Miami University’s Truth and Reconciliation Project, the marker describes the deaths of Henry Corbin (Jan. 14, 1892) and Simeon Garnet (Sept. 3, 1877), who were among more than 4,000 African Americans subjected to mob violence and lynching across the United States during the reconstruction period after the Civil War (1865-1950).

Corbin and Garnet, both of Butler County, specifically Oxford, were among 15 people known to have died by racial terror lynching in Ohio.

To create greater awareness and understanding about racial terror lynchings, the national Equal Justice Initiative works with communities to erect historic markers and monuments in these spaces. Miami’s Graduate School and Department of Family Science and Social Work created a seminar course, Truth and Reconciliation Project, to promote the national initiative as it relates to southwest Ohio.

“The broader vision for Miami’s Truth and Reconciliation Project is a continued focus on the work that remains left to be done in advancing truth and reconciliation around race in America and honestly confronting the legacy of slavery, lynching and segregation,” said Anthony James, associate professor and director of the Family Science Program.

Students investigated the lynchings of Corbin and Garnet and also collected soil from the lynching sites, which are now at the Equal Justice Initiative’s Legacy Museum in Montgomery, Alabama, where jars from across the nation are exhibited.

Students, along with coalition members, also worked with Oxford’s City Council, which adopted Resolution No. 7268 in March 2021 authorizing the placement of the historic marker in Dr. Martin Luther King, Jr. Park.