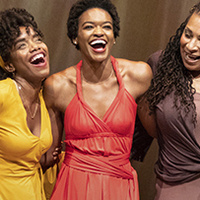 For Colored Girls is a choreopoem written by Ntozake Shange in 1974 that tells the story of seven nameless African-American women who have suffered oppression in a racist and sexist society. Each woman is identified by the color she is assigned. It consists of monologues accompanied by dance movements and music.

Subjects including rape, abandonment, abortion, and domestic violence are tackled. This play is for mature audiences only.

An RSVP is encouraged: MiamiOH.edu/Regionals/DMS