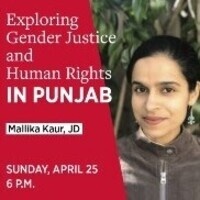 Mallika Kaur, JD will speak about the inspirations and aspirations of doing gender justice work within and for the Sikh community. She will also discuss her book focused on human rights defenders of Punjab who persisted during the armed conflict years. Punjab was the arena of one of the first major armed conflicts of post-colonial India. During its deadliest decade, as many as 250,000 people were killed. This book makes an urgent intervention in the history of the conflict, which to date has been characterized by a fixation on sensational violence—or ignored altogether.