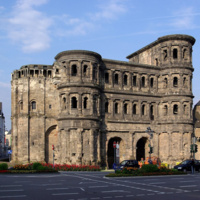 A little more than an hour away from Luxembourg is Trier, a city that was a major capital of the Roman Empire. Trier is home to no less than 10 UNESCO World Heritage sites.

We will leave the Château by bus, taking along a sandwich lunch, and arrive in Trier in time to start our visit around 13:30. We will visit, among other things. the Porta Nigra, the largest Roman city gate north of the Alps, Constantine's Basilica, built in the 4th century, the Trier Cathedral, and the Roman Amphitheater.

At the end of the day, you will have the option of leaving for independent travel for the weekend from Trier (from 18:00) or returning to Luxembourg.