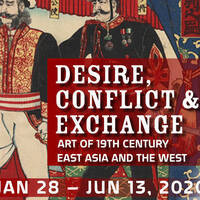 Western powers coerced Japan, China and Korea to open trade relationships within the expanding global economy of the 19th century. The exchange of ideas and artistic styles between Japan, China and Korea had already been in place, as well as trade within each of the East Asian countries. Tensions driven by aesthetic desires and trade advantage fueled conflict and exchange between these nations. Artworks produced during this time both reflected and inspired these dynamics.

East Asian aesthetics found a strong following in European countries such as England and France, and in the United States. On a local level, Cincinnati’s famed Rookwood Pottery employed a Japanese artist as director of painting. Most of the objects featured in this exhibition come from the Miami University Art Museum collection, with additions from Special Collections, King Library, private collections, and a special loan from the Crystal Bridges Museum of American Art, Bentonville, Arkansas.